“My fiance Steve and I met at The Parker House in the summer of 2016! Steve had already been working as a bar-back at Main Bar for several years. It was my first summer working as a waitress in the restaurant. One day before his shift, Steve came by the restaurant to say hello to some of his friends who were waitresses. I saw them talking to him and thought he was really cute and had a nice smile. I asked the girls about him and they quickly wanted to set us up. Jillian Berra who I teach with during the year then told her husband Larry Berra that I had been interested in Steve. Larry may have switched the words around a bit when he relayed this message to Steve, but either way he found out about my little crush. After a few weeks of quick conversations mid shift, Steve finally asked for my number after work one night at the foyer bar. The next day we went to the beach and began spending every day we weren’t working together. Now we are getting married this July and we owe it all to The Parker House. The PH will always have a very special and important place in our hearts.” 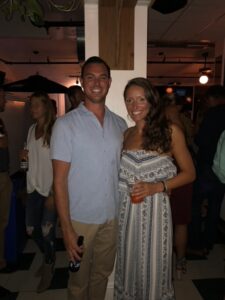