“A Fist Pump with “Chelsea”: It seems like just yesterday when it all happened. It was Summer 2016, the week before MDW, and everyone was flocking to Parker House in Sea Girt, New Jersey for the official start of the summer. Will and his buddies, who were living in Spring Lake for the summer, were ready to kick off the summer with the infamous Friday Happy Hour. As the mid afternoon was getting off to a great start, Will and his friends were setting their sights on the action in “God’s Basement”. As this was occuring, Will peaked across the room and saw something was off. Right at the bar, a tall bro had fallen asleep with his head on a young lady’s shoulder. Will made eye contact with that young lady and he knew he had to spring into action when she shook her head in distress. It was a matter of moments that Will, acting in good faith, would be meeting the one woman he’d be spending the rest of his life with. She was a beautiful girl with long blonde hair and serious beach vibes.A simple tap on the shoulder and fist pump with the bro on her shoulder resulted in him moving away and Will meeting “Chelsea” (or so that’s what he heard). A few Bud Lights and dancing made for the night they would never forget. Will took the first step forward and asked for her number, to which “Chelsea” replied “yes!”. A couple of texts back and forth finally revealed the young lady to not be “Chelsea” but in fact the love of his life, Kelsey.
Fast forward to April of 2021 when we became husband and wife on the beach! We go to Parker House at least once a year to celebrate where we met and relive the memories in god’s basement! We look forward to taking our children there some day (for lunch)!” 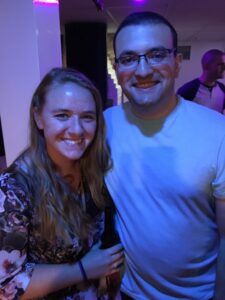