“How I met your father– Parker House love story.

The Jersey Shore has always held a very special place in my heart. From a very young age, I grew up spending summers on its beaches with my family and soon that turned into renting beach houses with friends in our twenties where we had a total blast! The Jersey Shore has created memories that I will treasure forever and think of often, especially all those times spent at the good ole’ Parker House! I loved everything about this place (and I still do) – – – from the rock bands and the competitive shuffle board games that were played downstairs to the amazing seafood on the outside back porch to the fun, lively dance scene upstairs. Although, there have been some recent, much needed updates to the place. (I was actually shocked and slightly disappointed in the bathroom remodel when those famous shutter bathroom doors of those tiny bathroom stalls were replaced. Those were the doors that heard all of our secrets before we went back onto the dance floor.) However, the Parker House holds the key to my heart because it’s the very special place where I met my future husband Matt, the love of my life, on one fateful Saturday night of August 4th, 2001.

My best friend Taryn and I were not even supposed to be at the Parker House that night. We had decided to go at the very last minute and enjoy a fun night of drinking and dancing after being stuck at a baby shower the whole afternoon! Isn’t that always the way?! The best plans are not planned at all! Saturday, August 4th, 2001: Drinks were flowing, the music was blasting, the bar was crowded, people were actually chatting since this was before our society’s obsession with cell phones. My friend and I ran into some friends at the bar and that’s how I was introduced to Matt. He bought me a drink which eventually led to a long kiss on the dance floor, ya’ know- – -typical Jersey Shore! (He still boasts to this day how I kissed him first, but he leaned in! LOL!!) However, this was the beginning of a beautiful relationship thanks to a great night at the Parker House. One year later, we were engaged, and two years later, we were married on August 9th, 2003.

Till this day, we return every year to the Parker House, along with our 12 year old son, Matthew, to enjoy a delicious traditional dinner on the porch. We get a kick out of watching all the dressed up “young” people waiting in a long line to get into this amazing meeting place and my husband

and I think back to our early Jersey Shore days! Hopefully, the Parker House will still be going strong in another 10 years and my son may meet that special someone just like his parents met over twenty years ago.” 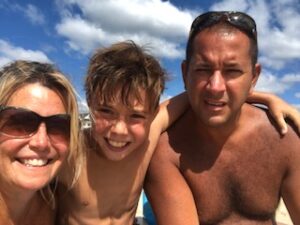