“My name is Maria McDonough, and my Husband is Jim McDonough. We met in God’s Basement in the summer of 1990!  I love that this was the nickname of this area of the Parker House!
Jimmy and I were introduced by a mutual friend, in early August 1990. He was a regular for years at the Parker House, however, it was my first year ever going there. I was a regular at Joey Harrisons Surf Club farther south. That year I had a summer house in Brielle with my older sister, who knew Jimmy and his friends. I was soon a fan of the Parker House vibe.
After being together for two years, we married on September 12, 1992 .  This year will be our 30th wedding anniversary, thanks to the Parker House! We were married in Monmouth Beach where we have lived ever since .
Thanks to God’s basement we have been blessed with 5 fabulous girls ages 18-26. The of age girls love going to the Parker House!  We have gone with them a few times and pointed out the spot where we met. They got a kick out of it!

Maybe they will meet their future soul mate as well there!

Thank you for the interest in our story! 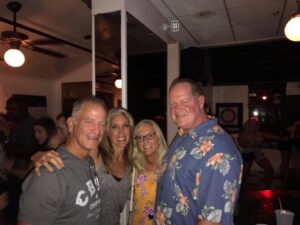