“Week after MDW 2009. It’s traditionally a quieter weekend and many of my Squan roomies abandoned me for Northern Territory. I shook off my grumpies, vanned it to PH and met a group of very funny guys by the shuffleboard table- and one hilarious Zach galifianakis lookalike in particular. September of this year will be 10 years of wedded bliss. Our three children also would like to shout out God’s basement for allowing them to be here today and look forward to finding their own true loves there in 14-17 years .

Our entire empire is built upon one chance meeting in God’s basement. We are forever indebted to Parker House for bringing us together and also all the nights (many, many, many nights over the course of 7 summers) we spent having the kind of fun you can only have at Parker. [We are] living the blissful parent life in Westfield. Parents to Jack (7) Molly (6) and Owen (4)  Mary-Kate is employed as an RN and John works in business/ always has a side gig of volunteering to coach basketball and baseball. Even when we were in the thick of  new parenthood  we still lived vicariously through younger cousins who were still partying there [at Parker House]  and creeping on insta to feel like we were still in the loop (or on that beautiful line).” 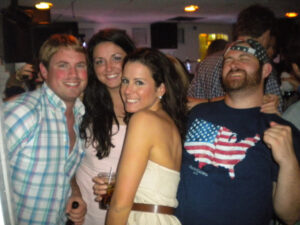