“Brendan and I “officially” met at the Parker House in July of 2013. He was down at his family’s house in Sea Girt for the weekend and I was meeting up with some friends on the back porch. We were introduced by mutual friends and spent the afternoon on the porch and that evening down in the basement singing, dancing, and having a blast. At the end of the night, after agreeing that dating in your 30’s is not as fun as it sounds like it should be, I asked HIM on date! 3 years later he proposed on Beacon Blvd. beach where we had spent many summer days and went right to the Parker House to celebrate. We were married 8 days later and celebrated 6 weeks later with our friends and family at the Columns. Brendan’s mom still lives in Sea Girt and we try to get there as often as we can. We now live in Rumson where we raise our 2 boys who are being properly groomed to earn their VIP cards in a few years! Anytime we are down in “God’s Basement” with our kids there are always young people who hear our story and tell us that they want the same one! The Parker House has always been, and will always be one of our favorite places on Earth.” 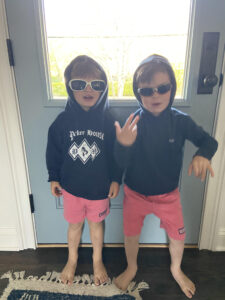 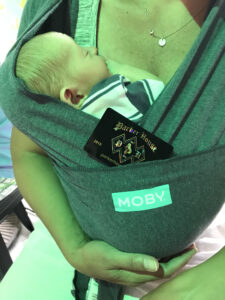