“Mike and I first met at a party in the city where we had mutual friends.  We both remember meeting and being interested in one another, but needed the good vibes of the Parker House to make it happen.  In the summer of 2015, Mike and I ran into each other in the basement.  We hit it off right away!  Mike vividly remembers offering to buy me a Spring Laker in the basement to then realize he had no cash… we’ve all been there.  I ended up paying for the drinks and it’s a scene that still haunts him to this day… I hardly remember it.  That romance fizzled after the summer, but we can’t really pinpoint why.  Two summers later, we reunited in the basement and it was for good this time.

Mike and I were engaged in December of 2019 in Central Park and finally married on January 1st, 2022 in Spring Lake.  We served Spring Lakers at our wedding!  We moved to Basking Ridge and still spend time at the Jersey Shore.  The Parker House will hold a special place in our hearts forever. “ 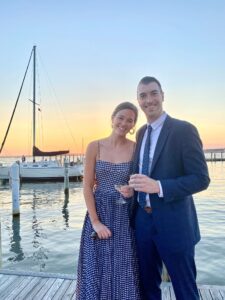